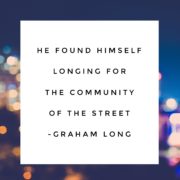 You Wouldn't Be Dead for Quids
Dear Inner Circle,

How does someone embrace life when a ghost lurks within, pointing out the history of failure and disappointments. How does someone who gets a glimpse of life’s potential overcome an active inner monster, trampling over the ruins of broken relationships? A man who has lived on the street for years has recently been housed and we had a conversation this morning. Although he was pleased to be housed and recognised what a significant step he’d taken, he told me that his anxiety was off the scale. It took a while for me to understand what caused the anxiety in what should have been a happy step forward. Slowly it became obvious that the addition of a roof over his head meant the loss of his community. This change seemed to occur just the right time when he’s had some success of not using drugs. He found himself longing for the community of the street, while at the same time dreading the community that normalises drug use. His need for companionship and social support seemed to invite the circumstances where he would lapse again into drug use. “Your greatest weapon” I told him, “is to call things by their real name. Anyone who is willing to see your life collapse on a fast track towards your death, is not a "friend". We talked for a while about what a friend is and is not. He expressed gratitude for all the support he’d found at Wayside and I was comforted to know he has people here who care for him.

Staff and volunteers often tell me of encounters with people that make our spirits soar. One story this week was of a man who had only just nursed his wife to her death. She was a Wayside supporter and on her deathbed, she told her husband that she wanted him to buy some blankets so that the winter would be a bit easier for the people we support. The dear man duly presented himself to our front desk this week, blankets in his arms and tears in his eyes.