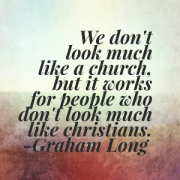 A state of blind fear overtook me the first time I had to conduct a funeral with zero information about the deceased person. I’ve had to do it so often now that I’ve learned to take my queues from the people in front of me. Normally at a Wayside funeral, plenty of people are willing to speak about the life of the deceased person – even those who have never met the person are often keen to share with us how they might have felt, should they have met them; it’s an endearing feature of a Wayside funeral. At the funeral I conducted on Monday however, not too many of those gathered knew the woman deceased. They had gathered instead to support her partner, who is a softly spoken, gentle man, grieving deeply for the loss of his loved one. If our dear man couldn’t speak, I was going to be in trouble.

We discovered that the woman and her partner had met at Wayside. They fell in love and ran off to the country where they enjoyed each other’s company until she became terminally ill. The man is a character out of a Henry Lawson short story. He’s a man who for many years has lived out of his car when in the city, but spends most of his time in the countryside, travelling from farm to farm, doing odd jobs until he’s saved enough to travel on to another farm. One look at this rather short man and you know he’d be more at home around a camp fire, smoking and telling stories than living in the city. He has the most faithful little dog in the world. If he commands the dog to ‘stay’, it will wait all day until the man returns. The woman was escaping domestic violence when they met. She brought an entirely unexpected dose of colour and fun into our dear friend's life. He talked of all manner of animals who shared their living space. He spoke of sheep with painted toe nails. He spoke of an adopted goanna that would knock on the door with its nose when it needed attention. We laughed, we cried and we held hands around the altar. We said...[read more]
By Graham Long
20
Aug
2015
Community/Homelessness/News & Views 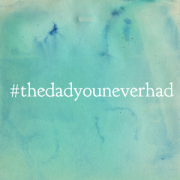 “I’m sick of being good enough to sleep with but not good enough to be with” said a young woman in my office yesterday. The words didn’t come from anger but from a profound brokenness. She told me that she’d been crying for three solid days and as soon as she stepped into my office, a new wave of grief hit so that every word was convulsed rather than said. A lover had just moved out and given a lecture about how he didn’t want to be, “in a relationship”. It became clear that the pain belonged not just to the events of this week but to the accumulated pain of ten years and at least five such unhappy endings. This young woman was perfectly groomed, in expensive looking clothes and had a pretty face. My son would have said she was, “hot” and not only so, her inner and outer beauty was stunning. Yet, she proclaimed herself to be the girl “that no one will love”.

Gosh the world has changed but I think it's a tougher world on women who long for stability and for children. When I was young, if you touched a girl’s bra strap, you were automatically engaged to be married. I was raised in a ridiculous, extreme culture but today I think we’re at another extreme and it’s a tough world. If I could coach young people today, I’d encourage them to say at the beginning of a relationship, “Slow up, this is not going to be easy! This is going to be expensive! This is going to cost time and energy and I expect you’ll gladly embrace the cost and want to tell the world of our love. You’re going to have to try hard to prove you’re a worthy mate.” When intimacy is easily won, it can be easily lost. A partner can opt out whenever it’s inconvenient and be confident that there will be another bus coming along in five minutes. Woo, I’m sounding like an old man. Speaking of old men, I noticed that ABC 702 were advertising the inner circle on their web page with the hashtag “#thedadyouneverhad”. Yet more proof these...[read more]
By Graham Long
13
Aug
2015
Community/News & Views 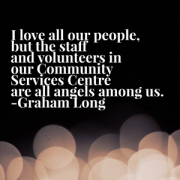 A scientist once told me that the human act of standing upright was quite a feat. I’ve just been observing how difficult it can be. There is a fellow at our front door suffering from a double whammy of a body that can’t stop moving and a complete loss of balance. He’s trying to put some things into a bag and I’m at a loss to describe how difficult this task must be for him. He’s fallen over several times in the past few minutes, but he can’t stay still even once fallen. The worst feature of his situation is that all of the body movements are contorted in unnatural moves that look for all the world like he’s a puppet being manipulated by strings. A bloke walked past him just now and muttered, “Mate you were better on heroin than this sh**”. Not only will ice lead to an early death but it will make of your precious moments, miserable. As I write I’m comforted to see two staff members heading over to the man. There couldn’t be safer hands for this man than are lovingly applied here. I love all our people, but the staff and volunteers in our Community Services Centre on our ground floor are all angels among us.

Just a few feet away, the most beautiful thing is happening before my eyes. A few weeks ago I told you of a relatively young woman who is near her end. I’ve seen a wonderful outpouring of love lavished on this dear lady. I’ve seen our dear Una do some breathtaking things as a way of fulfilling a last wish when death is imminent. Una has a tough job at Wayside. She is responsible for a team of staff and volunteers and every day she has to be tough as boots and soft as mush. Una can bark in her heavy Scottish accent and she has a stare that would frighten a Labrador out of a butchers shop. Yet few hearts are so big, so soft and so generous. Our dying lady is just now sitting in our café, looking most unwell. Una stepped up to her and began to brush her hair. I just witnessed bliss. Our darling terminal lady...[read more]
By Graham Long
06
Aug
2015
Community/Homelessness/News & Views 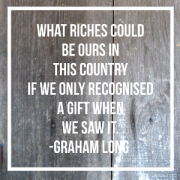 The treasure of this country does not lie under the ground but is to be found in our schools. I haven’t stepped foot into a school since my kids were little and last week I spoke across NSW in 12 schools. Actually I stopped counting after school three but I think it was 12 schools. We frequently hear expressions of despair about our young but to actually tour our schools and meet our kids would fill anyone with hope and optimism. I was blown away by the beauty and the character of the hundreds of kids I met. Surely education should be the first priority for investment by our governments and teaching should be esteemed as among the highest of professions. The NSW Australian of the Year crew are to be congratulated for turning an annual award into an event that inspires hundreds of school children. The tour itself in my view was more important than the award. We raced from school to school from Annandale to Wagga Wagga. Award winners, Jules, Genevieve, Cory and I had only just met on Wednesday and yet we worked as a well practiced team born out of mutual respect. It became obvious along the way that I was a city boy. In Temora (I think) I asked a kid what kind of farm he lived on. He said that his dad grows canola and wheat. “Any animals?” I asked. “He has a thousand head of sheep” he said. I then asked, “Does he have any whole sheep or just heads?” The look on the little boy’s face was priceless.

A tough little nut said to me just now, “I know you’re a hard man”. “Not only am I not a hard man” I said, “my only trick is that I am a tower of weakness for people”. “Well you’d look down on me” he said. “Are you fighting something big?” I asked. He began to weep and we sat on a bench at the front of our building. He told me why he’d served a long prison sentence. Most everyone I know holds something against themselves. It shows in how quickly we are to look down on someone else. If we can make a judgement...[read more]
By Graham Long
Words from the streets of Kings Cross