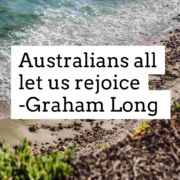 For the first time in years, I will not be an ambassador on Australia Day. I’ve loved the opportunity to meet folk from the far corners of this state and be trusted to give some words that connect, unite and inspire. I dipped out of the programme this year because my health is still not great. I’ll spend this Australia Day at Spencer, known by the locals as the “Hub of the Universe”. At the hub, there is a tree outside the general store under which Australian culture happens. The tree is known as, “the tree of knowledge” because the small group that gathers, find answers for most of life’s big questions and this remarkable feat is aided by liberal applications of beer. These people speak to each other with extraordinarily crude expressions of affection. My first impression was that they each detested the other but over time, I’ve learned that when any one of them is trouble, most set aside their own needs to lend a hand. Houses get renovated, cars get repaired, sick people get visited, lawns get mowed and ultimately, everyone gathers under the tree of knowledge where various questions without notice are considered and much beer is consumed. On the 27th, the Hub of the Universe stops for the event of the year, the Spencer Cup. I think this entails anything that can float and move by paddle power, entering a race on the Hawkesbury River. The town has its own blues band, the unique, “Inder-Spencer-Bulls” featuring the amazing talent of Andrew Long on keys and vocals. The band will set up and play on someone’s front veranda near the general store. Friday and Saturday will be a great celebration of Australia and cause me much...[read more]
By Graham Long
17
Jan
2018
Community 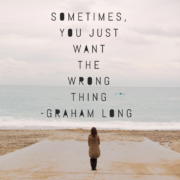 Outside my window just now a bloke yelled, “Even though I walk through the valley of the shadow of death, I will fear no evil for I am the meanest son of a b**ch in this city.” How funny is that?

On my way into the building this morning, I was greeted by a smile that reached into my heart and robbed my brain of any content. A dear man who I have seen through many a ‘dark night of the soul’ was busting to see me and tell me that he hadn’t gambled since September. It isn’t alcohol or any other drugs that bring this fellow down, but the pokies. For years he’s poured what little money he had into those machines and each time it was as if he was feeding his character into them. The emptiness and self-loathing that followed was disturbing to behold. It was not just that he suffered the indignity of going for days without food or needing to beg for a bus fare. It was that he was willing to be robbed in this way. His body shows evidence of deep self-hate, with thousands of scars from deep, untreated wounds. Both of us knew the significance of this meeting, yet we did not need to say a word. His face said it all. He was here and he was ok and we threw our arms around each other because we both knew and rejoiced in it. Afterwards, we told some silly jokes to each other over coffee, his shout.