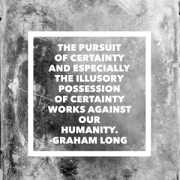 the joy of not knowing
Dear Inner Circle,

It's funny how when a new little person comes into your life, you don’t have to redistribute your reservoir of love but rather your heart enlarges and you discover reserves of love you never dreamed about. This week Liz, who has worked with Wayside in a most effective way as our Partnerships Manager, brought in her new baby, Juliette. There is suddenly more to Liz now. There is more to us now too. My heart has also enlarged to include a little boy named Flynn. He’s only four weeks old but he and I were deep in discussion last week. He began to make a little expression of discomfort and so his three-year-old big sister walked up close to me and said in a confidential manner, “He doesn’t like you!”

When I conduct a wedding, I usually try to evaporate briskly and discretely after the ceremony. Often, however, I get caught by people who want to thank me for the ceremony or simply say, “hi”. I think weddings are beautiful, sacred things but can also be quite fun. After an enjoyable ceremony last week I was soon in a huddle with people. An immaculately groomed elderly man shook my hand and said, “I used to be a devout Christian and now I’m agnostic”. I said, “I bet you’re a nicer man as an agnostic than as a devout believer”. It wasn’t what he expected me to say. “Well,” I said, responding to his shocked expression, “real faith has a large dose of ’not knowing’. If ‘devout believer’ means that you were part of a ‘God franchise’ then God, you, me and the world are better served by your agnosticism.” The pursuit of certainty and especially the illusory possession of certainty works against our humanity. In recent days my social media is full of people spitting chips about religion. Lots of people revert to a kind of ‘my little pony’ type philosophy, leaping to the nearest piano to sing, “Imagine there’s no heaven, it’s easy if you try…” But we’re all being damaged not so much by people...[read more]
By Graham Long
19
Nov
2015
Community/News & Views 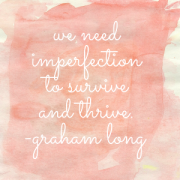 At the front door this morning, a woman stopped me and asked, “Have you got time to speak with me?” Unthinkingly, I opened my eyes wide and said, “I wouldn’t say I have time but let’s sit here and talk for a bit.” Soon I’d forgotten that people were waiting for me because the beautiful face locked with mine. She knew she had my attention and she poured out something that she said she’d been hanging onto for some time. “I want to thank you for loving us. I saw you on the tele just recently and I just knew I had to find you and thank you for loving us. You probably don’t think we’re religious but lots of us pray for you. We think of you as our father. I think of you as “Dad”. Tell me that you’re doing OK because if you need anything, I have friends and we’ll do anything to protect you and help you.” Imagine if I’d have missed this moment by being too busy! What an amazing outpouring of love and what a gush of affection. I thanked her for the love and said, “You are a wonderful lady”. She opened her eyes wide and said, “Oh, I wouldn’t say I was a lady”.

An extraordinary success story sat in my office this week. He was dux of his various schools and prefect or captain. He’d won various university medals. He has studied in the best schools around the world and would be considered a world leader in his field. There ought to be a stronger word than “focus” for the manner in which this person sets goals and then achieves them, no matter the cost of the commitment. It was an honour and inspiring for me to sit with such towering intellect. He came to see me because, “I don’t know who I am” and “everything seems so empty and a waste.” I was not shocked. The only source of information about ourselves comes from others. None of us invented anything about ourselves. We wouldn’t even have the power of speech if we weren’t first spoken to by someone else. If you only relate to competitors, it...[read more]
By Graham Long
12
Nov
2015
Community/News & Views 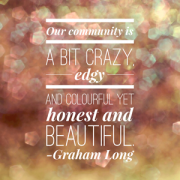 To speak is to act
Dear Inner Circle,

Kings Cross is a great community. I decided this week to walk up to the main drag and write this note from a spot near the fountain. Already I’ve been stopped by numerous people. One was a dear old lady who looks to be at least mid-seventies, with a high mileage face and looking a bit the worse for wear even at this hour, but nevertheless with a kindness in her face. She’s a short little lady whose hair has been set in a way that would remain still in a cyclone. She looks like she’s spent all her life telling someone off and giving lectures about how the world was once perfectly ordered when the world was a tougher place. Oddly, she knew who I was and asked, “Do you drink carver, farver?” It’s a funny question I know. “Makes you sleep like a baby” she said.

Directly across the road is a woman plying her trade. Quite a large girl with almost everything on show. It looks like she’s wearing a blond wig and she has large sunglasses on, making it clear that it’s the body that’s for sale rather than the person. This mind/body schism works for men and women in the sex trade, and for most of us at the moment of death, but generally we find it problematic to divide psyche and body. She’s just been joined by a rival or mate who is working the same spot just near me. The second young woman is known to me. She has a trim body and the dress she’s wearing is her method of keeping potential customers' attention away from the face and the person. This second woman is intelligent and comes from a good home. She has an addiction and this work is her only real option for funding her habit. There is nothing easy about earning a living in this way. 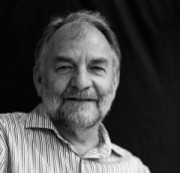 To speak is to act
My heart sank yesterday when I read of a man who was put off a bus because he wouldn’t or couldn’t speak English. Ignorance and fear abound. Speaking English is the most multicultural act possible. To speak racism in English must the contradiction of the century.

Still in English there is evidence of the ancient Celtic tongues. Irish, Scottish and Welsh languages all survive to some extent in today’s spoken English. The most unwelcome invasions of the Vikings who eventually settled in England added greatly to the culture and the spoken word. The old Norse words such as "bug, bull, wing, dirt, dregs, muck, mire, rotten, bark, call, blunder, choose, crawl, clip, want, whirl, ball, bag, knot, cake, link, sly, ugly, weak, fellow, guest, kid, lad, anger, awe and happy”. These and many more are proof that our language was invaded and then enriched by the Vikings. To spend any time in England is to be puzzled by how many accents exist and how many locations, quite close to one another, have their own distinctive accent. Around York, the language of the Vikings remains strong in spoken English.

Nearly half of all English words are French. You can’t speak English without affirming an amalgam of cultures. As French was the official language in London for about 300 years, it is no surprise that the languages merged. There isn’t an area of life or interest that you can speak in English without inadvertently speaking French. “Government, peasant, bailiff, council, mayor, minister, parliament, mass, dame, duke, prince, sir, infantry, army, pistol, squad, platoon, surveillance, rendezvous, siege, terrain, camouflage, morale, money, commerce, finance, tax, plebiscite, state, federal, bureaucracy, constitution, justice, jury, attorney, court and case” Need I go on? We can’t speak English without asserting a cultural amalgam with the French people.

You can’t speak English without thinking Greek. The only way to understand Western culture is to understand...[read more]
By Graham Long
05
Nov
2015
Community/News & Views 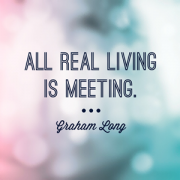 Yesterday a woman sat in front of me and poured her heart out. It was one of the most difficult and agonising conversations I’ve ever had in my life. It took her a while to tell her story and she was at pains to soberly relate the worst without over or understating the case. Time stood still as together we paused to gaze at the unthinkable. After a long pause and when it seemed like the worst had been said, she said, “So what’s the Graham Long great wisdom in response to this?” “Oh” I said, “Did you get the impression that I aimed to be useful? My aim is to be gloriously useless!” I think it is a mistake to want to “resolve” things. Often to “resolve” something, a massive exercise in forgetting is required. Some of the most unwell people I’ve met have resolved their psychological conflicts quite well but they have done so by shutting down history and shutting down a part of themselves. It’s better to enable the inner conflict so that a way is found for the various parts of the self to all engage in life, without obliterating anyone or anything. What is true for the psyche is true for communities. We don’t need to “resolve” the tensions between Muslim and Christian; atheist and religious; sick and well. We just need to find a way of enabling a conversation between both. A healthy community is not one free of conflict. Stability is a form of death. Homogeneity only ensures that communities will fight over lesser issues rather than important issues. Beware of ‘oneness’; beware of ‘unity’; it’s a trap! All real living is meeting.

A nearby church held a concert to raise funds for Wayside last Sunday. How could I not go? On the program I noticed 17 acts and every act did multiple items. In addition to the printed program, some neighbour had written a novel and they decided he would read a portion of it. A lady who was to play the flute was on the program for six songs. I saw her on the way in and she...[read more]
By Graham Long
Words from the streets of Kings Cross