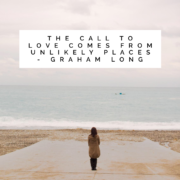 For Those With Ears To Hear
Dear Inner Circle,

A couple of weeks ago I wrote some uncharacteristically harsh things about drug testing as a condition of support for unemployed people. The same day that I wrote harshly, the Prime Minister spoke of the issue as a question of “love”. He stopped me in my tracks. I spoke like a politician and he spoke like a spiritual leader! Some may have seen the PM’s words as naïve, or as an attempt to manipulate the naïve, but I know the man and he spoke from the depths of his heart. When has a Prime Minister ever used such language?

The PM sees the mechanisms of government to be perfectly congruent with love. I have a mate (a QC and an ex Attorney-General) who sees the law itself as a loving provision for a community. I get it. Without the law and all that government provides, the country would quickly descend into a chaotic and unlovely place. If we were a healthier culture; if we had not become a culture of victims, crusaders and opportunists, perhaps we could have heard his words and been elevated by them. 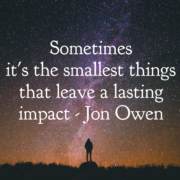 A text popped up on my phone today from a young woman whom I hadn’t heard from in over a year. When I first met her, she was only 11, a tiny, withdrawn girl whose beautiful smile could light up a room, yet her eyes rarely lifted from the floor. We lived next door to her in Mt Druitt and she would often come over to our house to talk with my wife Lisa. Initially I thought she came to play with our young daughters, who simply adored her. Yet in time, I realised she was escaping a household where abuse was a daily occurrence. It’s difficult for me to understand a father who could scream at his beautiful children until 2 in the morning. It’s even more difficult to understand why some nights she would take it upon herself to deliberately bait her father when he returned home in a drunken rage so that he wouldn’t turn on her mum and younger siblings. When we moved away from Mt Druitt this girl was the person we found it hardest to leave, we even quietly begged her to come with us. Her message today stopped me in my tracks. It wasn’t a cry for help, it wasn’t a list of the latest failings of her father, it was a message full of hope. She thanked us for the years of love we’d shown her and talked of the happy times she’d spent in our home. She told me that she’d just finished a bushwalk through Tasmania with her school, a feat she’d never thought she’d accomplish. I’ve re-read her text about one hundred times today. Sometimes it’s the smallest things that leave a lasting impact.

When something human happens, at least two people are changed. This week a searching email made its way to my inbox from the partner of a fellow who was living on the cold streets of Melbourne 20 years ago. I’d walked past him on the same corner every day on my way to work until eventually I gave in, and ignoring some of my better judgement, asked him if he wanted to stay in our spare room for a few weeks. We took him in off the streets, but we...[read more]
By Graham Long
11
May
2017
News & Views 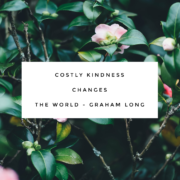 Costly kindness changes the world. The Kings Cross police were called to attend to a lady in the main drag the other day. The woman was in poor health and barely conscious, I presume under the influence of a bucket-load of alcohol. It was a sergeant who attended, so I guess things must have been pretty busy for police that day. The policeman engaged the lady with purpose but with the tenderness of a son dealing with a beloved Mum. As he helped her to her feet, she grabbed him on a part of his body that guaranteed maximum pain. She refused to release her grip and you’d have to forgive the man if he’d have put her on the ground as he could have easily done. In spite of the pain he was enduring, the policeman continued to smile and offer comforting words. After a few minutes, she released her grip as he made it clear he hadn’t come to lock her up but was interested in finding a better place for her. How often do you hear police commended for costly kindness? I can tell you that many times over this past thirteen years, I’ve witnessed such kindness on the part of police. There is sometimes a cop around who has seen too many American movies, but on the whole, certainly in Kings Cross, we have every reason to be proud of the police.

Earlier today a frail old man who had become disoriented through years of sleeping in bus stops and in parks, had reached a point where we had to organise medical treatment, whether the man liked the idea or not. Our John, the gentlest man in the world with the softest heart, did his best to assure the man that medical help would make him more comfortable. In reality, the lack of medical care would kill him in short order. The man resisted to the point where he threatened to strangle John with the telephone cord. Worse than this, he accused the kindest man in the world of every cruelty he could express. Most people would let it roll over and off them, but such things lodge in John’s...[read more]
By Graham Long
04
May
2017
Community/Homelessness 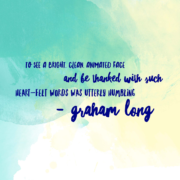 A gorgeous young fellow who makes the world a better place just by waking up in the morning, was in the café today after some months away. I was delighted to see him but concerned because he’d clearly lost a lot of weight. I asked him about his health but he insisted first on discussing my health. I’ve had a few challenges with health this year and this fellow knew enough to prevent me from switching the attention back to him. As we talked, the kindest eyes in the world kept focus on me. I could have been talking to my father or my daughter. Eventually I needed to keep moving and I thanked him in a lighted-hearted way to almost balance the intense love in my face. His words too were light-hearted, and yet we both knew the depth and weight of the care we exchanged. “You’re a gentleman and a scholar,” I said. “I have my moments,” he replied.

A couple of weeks ago, our staff at Bondi travelled up to my office in an unusual gesture because they were so concerned about a woman whose situation was so dire, they believed it was a matter of life or death. The small unit in which she lived had become infested with bedbugs and all manner of insects. The person was handicapped and unable to move without the aid of a chair and someone to assist. Various agencies had been involved but they had mostly ceased any support out of concern for the health of their own staff. Our staff at Bondi had badgered government departments and various private agencies to the point of becoming a total nuisance. No-one felt it was their job to help. The person themselves had so lost the will to live that in conversations with our people, as bugs crawled over her face, no effort was made to even brush off the vermin. Wayside has no budget or capacity for such an emergency and yet I was convinced that death was a real possibility of inaction. I have a band of angels who have indicated from time to time that I can call on them in extraordinary circumstances. My...[read more]
By Graham Long
Words from the streets of Kings Cross