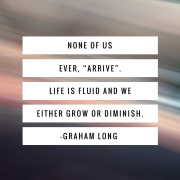 None of us ever, “arrive”. Life is fluid and we either grow or diminish. Our lives are either opening up or closing down. At Wayside, we recognise a life closing down when the driving question is, “What can you give me?” There is a closely related question, “How much can I get for the least?” and you don’t have to be homeless to be driven by that question. At times for all of us, life is closing down, small things seem to loom large while important issues become invisible. At times, hopefully for all of us, our lives open up. It’s always a surprise and eventually a delight. At Wayside, we can’t make anyone suddenly want to live. The best we can do is to be awake so that we see what we’ve been looking at all day. We have no secret and we are suspicious of all who claim simple answers or any kind of magic. We know however that when a life begins to open up, the driving question shifts to become, “How can I help?” One of the special honours about working at Wayside is the number of people we meet, some rough sleepers, some volunteers, some staff, some donors, who all come to us asking the question, “How can I help?”

One of our staff members told me how he’d been through a chapter of his life where small things were beginning to dominate his thinking and life. I first met this bloke as a rough sleeper. He’s a big bloke and when he was in the grip of alcohol, he was one of our more dangerous visitors. We’ve travelled together for a few years now and we’ve witnessed both amazing growth and, from time to time, a relapse into old habits. He’s doing so well; he’s doing a fantastic job and living in his precious little unit near Wayside. Recently he told me of growing tension with a neighbour. His neighbour objected to his use of his small BBQ on his balcony. Tension has been building and complaints have been made. Recently, every time he cooks, his neighbour has been taking photos and videos as evidence of the...[read more]
By Graham Long
17
Nov
2016
Community/News & Views 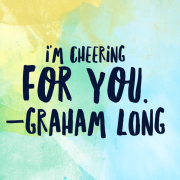 On Our Best Behaviour For a Day
Dear Inner Circle,

“Hey Rev, I haven’t used a needle in four days!” We were standing on the main drag of Kings Cross. “Wow”, I said, “Congratulations! It must be an hour-by-hour battle.” “More like, minute-by-minute,” he said. He told me that Wayside was the only place he felt safe because everywhere he was surrounded by people who look like friends but who only use him for their own purposes. “My goal is to become a volunteer at Wayside and one day maybe, find myself on staff.” We hugged in the middle of the street and as I hailed a cab he said, “Rob was a drunk and he’s dry and alive and on your team. Andrew was helpless with heroin but he’s clean and on your team. If they did it, I can do it!” As I shut the door on the cab, I just said, “I’m cheering for you.”

Today, just a few minutes ago, the Hon Malcolm Turnbull MP, Prime Minister of Australia, officially launched our iconic new book, Wayside. A crowd of 100 people gathered on the Wayside rooftop to get their first peak at a book which reaches right into the soul of Sydney and celebrates the diverse characters that call Kings Cross home. Media mingled with rough sleepers and Wayside donors in a community event that couldn’t capture the essence of Wayside more. Few have the capacity or stamina to be a PM but most in the country think they could do a better job. The PM’s love and passion for our vision and our work is 100% real. There are not many books launched by a PM and there have not been many PM’s who would launch such a book. We’re proud of how much love, sweat and tears have gone into making this book what it is, and we hope that you will love it too. You can get your copy here. The official launch will be followed by a party for all comers. Every street person who appears in the book will be given a framed, individual portrait, David Wenham will cut a cake and there...[read more]
By Graham Long
10
Nov
2016
Community/News & Views 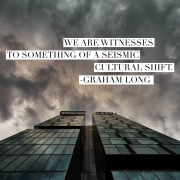 It is a great honour to announce that Monday marked the official release of Wayside – our iconic new coffee-table book that reaches into the soul of Sydney and showcases the depth and diversity of the people who call this city home. Wayside is a beautifully curated portrait of our community; it’s a book where everyone is a person to be met, not a problem to be solved. The stunning photography is by Gary Heery and the book is lovingly designed by Andrew Henderson. It features stories from the streets of Kings Cross, along with four letters I’ve written to people who have transformed in front of my eyes. Wayside has long been a place where love famously meets hate. We operate at the pointy end of humanity with some of the most difficult souls in the world but there is beauty to be found if you have the eyes to see it. Buy this book and drink it in. It is kindness, captured in a book and it shows on every page that there is a better way. We have a special offer for our dear Inner Circle readers - the first 100 copies ordered online here will be signed by yours truly. The book is also available in our Wayside Op Shops in Kings Cross and North Bondi and would make the perfect gift for Christmas.

We are witnesses to something of a seismic cultural shift. Overnight, many of you have become prophets. A prophet is a person who fights with a feather, calling things by their real name. Prophets are often seen as odd and even at times, disagreeable. America has declared something of a rebellion against a system that enriches the few and squeezes the many. America has shifted in the attitude that has, for many years, made them something of a global policeman. Given their dismal performance in this role, it might be a good thing. America has a rare opportunity to think and act differently about the biggest issues of our day. Whether the new President is up to this task, no-one knows. What we can say with certainty is that the world has changed,...[read more]
By Graham Long
03
Nov
2016
Community/News & Views 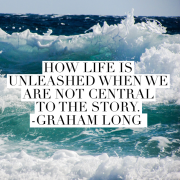 “Hey Rev, I found my Mum.” I was looking into a face that couldn’t have been forty yet. It was what I call a “high mileage” face but with unmistakable beauty and character. Our eyes engaged from the first second of our meeting. This was a man who had looked for his mother for most of his life, having been given for adoption as a baby. Although he’d recently found her, she is dying. He discovered that he had three sisters. “She never gave any of them away. Just me!” he said. Every word seemed to hold both the joy of finding his Mum as well as the pain of her imminent loss. He couldn’t yet begin to understand why he was given up when there were other children who grew up with their mother. He was busting to ask her about how this all happened but instead he just asked if there was anything he could do for her. Her reply was that all she needed was to know that he would always be in the life of his own son. Her greatest fear would be that she’d caused injury that might sustain for generations.

How life is unleashed when we are not central to the story. The young fellow asked me to pray for his Mum. I have no idea what I said nor does it matter. We spent a moment where what mattered was, Mum. He knew I had no magic but he had freedom to be with me in a space without answers. There wasn’t an outcome in sight. I felt no necessity to find a prayer that would, “work” but bare hearts groaned together for life lost, for ground impossible to regain and for a lifetime of longing and love unexpressed and unfulfilled yet alive, fluttering and awake.