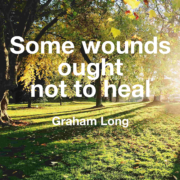 Sacred Places
Dear Inner Circle,
There are few places where you can lament birthdays that won’t be celebrated, school assemblies that won’t be attended, weddings that didn’t happen and grandchildren that will never be born. The ache in a parent who loses a child remains forever. By the time you’re reading this today, I will be with some people who will make a public park a hallowed place. Time doesn’t heal all wounds and really some wounds ought not to heal. I never want to live as if I’d never lost a precious son and nor do I want to be a wet blanket for anyone else’s journey. Precious and few are the moments when such a deep pain can become familiar and even a friend. This morning I will lead such a ceremony. Tomorrow night, I will lead a similar ceremony in a Catholic cathedral that will be packed with parents who’ve lost their children. What a painful honour and agonising joy to share life in such fullness with others.

I have news to share regarding Robyn’s health. The short version of a long story is that although she was diagnosed as having had a stroke, eventually she was diagnosed with a syndrome that is caused by cerebral fluid not draining from the head properly, causing symptoms of paralysis and of a stroke. The good news is that in 95% of cases, people with this syndrome recover to full health. Now I’m not a betting person, but I like those odds, and I’m pleased and relieved to tell you that Robyn is home from hospital and every day she seems to be doing better than the day before. I can’t begin to express our relief. Thank you for the overwhelming number of messages of love and support in response to last week’s note. 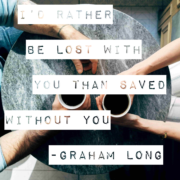 Sitting in our café, I paid little attention to a young fellow who sat beside me until he rested his head on my shoulder. At first, I wondered if a substance was causing him to find it hard to stay awake, but it became clear that he was holding his head in a deliberate act of affection. No words had been said. Not all dialogue needs words. After what felt like some long minutes, we turned and looked into each other’s faces.Still without words, I got it. A fellow who had been doing well, was in a lot of trouble. “Can we talk?” he said as he got up and walked outside. It took a while to free myself from what I was doing, and find this fellow standing alone across the other side of Hughes Street. When the words started, they gushed. “Trouble” hardly begins to describe his situation. It was hard to understand how anyone could fit so much trouble into just a few weeks. The last time we met, he had the freedom of looking everyone in the eye. Today his eyes scanned every direction all the time, not just looking for cops; they are the least of his worries. I hugged the bloke and said, “Mate, you did this to yourself. There is no upside to this.” There was some more dialogue with few words. I hoped he could see his emptiness and my lack of words put us both together in a state of loss and grief. I hope by now he’s turned himself into the cops as he’d be a lot safer with them than just about anywhere else. My parting words were, “I’d rather be lost with you than saved without you.” We hugged once more and I pointed and said, “The police station is that way.”

I’m relieved that the same-sex marriage issue is resolved. None of us emerged from this period of debate well. The process has demonstrated with new clarity for me the polarising effect of the debate. The agony of these past weeks has been to see how people clustered together to push their point. Both sides, offering opposing arguments and gathering ever greater...[read more]
By Graham Long
09
Nov
2017
Community 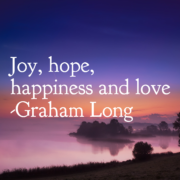 Welcoming a new life into a family, a tribe, a community and into humanity, with a special ceremony is usually a happy and beautiful occasion. Yet there are times when some try to manage the moment with such a fuss that tempers flare while the beauty evaporates. In the past few days, I’ve participated in several such ceremonies. One father was an outlaw bikie and at first glance, it was hard not to be taken aback. I must have been a prison chaplain for too long because when a face is heavily tattooed, my heart melts in a lake of lead. Thankfully, I was wrong again. I met a beautiful man who loved his family. We cracked jokes together and it was all going well until I asked which club he belonged to. I said, “Are you with ‘Deliveroo’ because that club seems to be everywhere lately?” I thought I was funny but it took me a long second to realise that outlaw bikies don’t joke much about their clubs.

At another such christening, a father greeted me reservedly, giving me the impression that he only reluctantly agreed to this religious moment. Within minutes he said, “You know I don’t believe any of this sh**!” Once again, I’m confronted with a character that thinks I’ll have some interest in the content of his cognitive propositions. I said, “Mate, I’m only interested to know if you believe in existence.” “What existence?” he asked. “Well, I’m interested if you really know that it makes a big difference whether you’re here or not.” I didn’t know at the time, but prolonged drug abuse had strained this marriage to breaking point. He spat some words at me. “How could that matter?” His question was confronting, and I was reminded of my aptitude for getting myself into a corner that I’d have been wiser to avoid. There is no argument to counter a, “Life is not worth living” statement. This fellow was well dressed, driving a nice car, living in a nice suburb, and broken. I said something like, “I’m...[read more]
By Graham Long
02
Nov
2017
News & Views 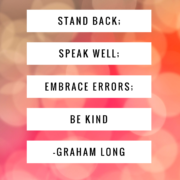 Yesterday a group of business people asked me about resilience. The questions they asked made it increasingly clear that they thought that somewhere in everyone’s psychology lives a box that contains a quantity of resilience. “How do you keep the glass half full?” “How do you keep the passion for your mission alive and healthy?” “Don’t you get tired?” All these questions presuppose much the same thing. Some people are so certain of my inner resilience box that on occasion I get invited to write a book on the subject. Alas, the misunderstanding is profound. Our mission doesn’t live in me or in anyone else. It lives between us. There are times when I speak passionately about our mission of creating community with no 'us and them’, but they are only empty words unless the mission lives between us. The good news is that when the mission lives, I find myself to be necessary, significant and not central. Every time I flourish as a human being, whether in the context of my marriage, family, workplace or anywhere else, I find myself to be necessary, significant and not central. The joy that is unleashed by knowing it’s not all about me is all the energy I need. And it's all the energy we need at Wayside to keep doing what we do. When an occasion strikes where I think it’s all about me, I need to stand back enough to allow the mission to take the central position and to recognise it as living - not within, but between us.

Our mission is not difficult but it is counter-cultural. The last thing Wayside or any other workplace needs is people who have loads of patience for visitors or customers and loads of judgement for the colleagues working at their side. Religions everywhere have people who wish to love and serve the whole world, but have an intense dislike for their brother and sister serving beside them.