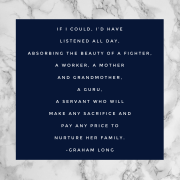 Our hall filled with mostly young Aboriginal people this week. We’re supporting the formation of an Aboriginal women’s football team. Once a year the biggest gathering of Aboriginal people in the State happens at an annual rugby knockout competition. For the past couple of years, a private sponsor has funded a Wayside Aboriginal men’s team for the competition. Other donors have stepped forward to sponsor the men’s team again this year, but our Aboriginal Project Manager, Mon, is passionate about forming a women’s team. To see our hall filled with young Aboriginal women, excited to play football and proud to be playing as a community, was enough to melt anyone’s heart. It looks like I’ll be on the sidelines this weekend, understanding nothing about the game but cheering for this fabulous act of community making.

Thirty years ago a woman and nine kids landed on my doorstep. They had all been living in a small caravan with an annex. The Mum was the roughest of diamonds. Hygiene in such circumstances was difficult and although everyone appeared to be fed and clothed, the diet was determined entirely by price and no one’s clothing was either fashionable nor new. Yet, everyone got fed and everyone got loved. I don’t doubt for a second that if Government authorities had become involved, the children would have been separated from their mother. We found housing for the family in due course. It wasn’t ideal and soon to all these kids was added a bunch of animals. There were so many issues that were less than ideal but I recognised goodness and love. As the clan grew I baptised children, and performed weddings. Yesterday, twenty-five years on, there was a reunion here at Wayside. A daughter that I married now has nine children of her own and five grandchildren. Not unlike her Mum, this woman is amazing. Twenty-five years later, the marriage is strong and there is an earthy wisdom that comes from pure struggle. The husband and wife...[read more]
By Graham Long
22
Sep
2016
Community/News & Views 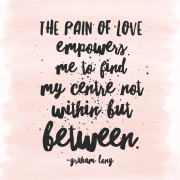 It's What We Do at Wayside
Dear Inner Circle,

Sometimes these notes come from a heart that is overwhelmed by beauty. Sometimes the heights to which the human spirit can soar fill me with hope and in my own feeble way, I seek to create a note that points and bears witness to that which is hidden in plain view. To the extent that I have ever felt like I’ve succeeded, I probably blasphemed. Sometimes it feels like I’ve reluctantly received the gift of stigmata and blood pours through my hands, all over my keyboard and into my text. Sometimes, perhaps often, both events occur in the same note.

So I stood in silence this week with a woman, one of her hands in mine and the other on her son’s coffin. How she had fought for him. How she had believed in him when all others gave up. How she saw beauty and potential even when her son couldn’t see it in himself. It had all come to this moment. There were no words, just one hand in mine and one on the coffin. There were no words. Perhaps for this lady it was a moment of defeat but I suspect not. I suspect this was numb love. I held in my hand a beauty beyond imagination. Some things cannot be squashed even by death. I know something today that I didn’t know on the day when I had one hand on my son’s coffin and one arm around his daughter. Love is not diminished. Pain sharpens and dulls and sharpens again but love remains real and deep. I can’t begin to explain it really but the pain of love refines me and renews me. It’s a pain that has loosened the grip of many stupid things that once loomed large. It’s a pain that helps me see what truly matters. It’s a pain that helps me name things for what they really are. It’s a pain that causes me to talk back to the TV and empowers me to switch things off. The pain of love empowers me to yell, “empty” to many things that present themselves to us as full. The pain of love empowers me to whisper, “absence” to many things that appear to promise presence. Mostly, the pain of love...[read more]
By Graham Long
15
Sep
2016
Community 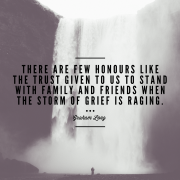 The Joy of Being Wrong
Dear Inner Circle,

Being wrong has never been so sweet. Coca-Cola approached us to say that they were going to auction their iconic sign at the top of Kings Cross and donate the money to Wayside. I loved the gesture but couldn’t hide my scepticism about people paying money for a bit of an old sign. Getting into the spirit of the best intentions coming from the people at Coke, I started to tell people that we might benefit to the tune of $10,000 if all went well. When a text came one evening this week to tell me that they’d raised $100,700, I thought there had been a mistake. To say the least, we’re grateful to the good people at Coke and to all the people who paid money to buy a part of the old sign. When speaking publically, most people want to hear of our work, but with 90% of our funding coming from non-government sources, there is a story to be told about outrageous ideas, breathtaking generosity and faithful regular giving that keeps us doing what we do

What could be more powerful than a eulogy delivered from a mother’s torn heart. This week we buried a young man. We saw slides of a little boy in a healthy, happy family. He was well provided for and surrounded by plenty of loving family. Something went wrong that shattered this young boy who spent the rest of his short life seeking what comfort and anesthetic that drugs could provide. His Mum said, “No life is wasted and there was nothing wasteful about my boy. He was here, and we’re all better people because he was here.” Just minutes ago I finished another meeting with a family to arrange the funeral for their young bloke. The endless stream of funerals that are a feature of life at Wayside do make our way heavy at times, but that is not to say, depressing. There are few honours like the trust given to us to stand with family and friends when the storm of grief is raging. Helping people give expression to the inexpressible means we are often part of a family’s defining, epoch-making...[read more]
By Graham Long
08
Sep
2016
Community/News & Views 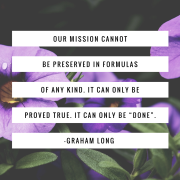 Increasingly, I find myself talking in board rooms or before work-teams or to middle and senior managers about Wayside’s mission and how it lives in our work and organisation. I have a growing sense of disquiet, knowing that our mission doesn’t live in a formula nor a set of values. The danger for Wayside and especially for our senior leaders, is in believing that our mission lives in a set of words. Generally, we Waysiders like our words and our values. “To create community with no ‘us and them’” are words that point to the awesome. Paradoxically, I suspect the more we cherish the words, the faster we fossilize the mission itself. The more we believe we master our mission, the faster the mission itself evaporates through our fingers. Our mission cannot be preserved in formulas of any kind. It can only be proved true. It can only be “done”. We can only begin each day as beginners and begin each day as if it is our last opportunity to live our mission.

To “create community with no ‘us and them’” is not an act of reflection. Our mission is not made real when it is pondered nor preached about. It can only be done. Our choice is to be beginners, or idolators. Our mission only lives when it is in front and while we are on our way. Oddly, to be on our way requires of us endless unromantic acts. Front line workers take people for showers and do battle with the systems that exclude poor people. Front line workers confront people who constantly seek to break our rules or gain some advantage. Front line workers constantly hope for meeting. Maybe today someone will realise that there are people here with them and for them. Managers manage staff who can’t always see that order and rather uninteresting arrangements in an organisation are important if the organisation is to avoid digging its own grave. Sometimes people so believe that they are alone, that they come through our front doors insisting that they be treated as a...[read more]
By Graham Long
01
Sep
2016
Community/Homelessness/News & Views 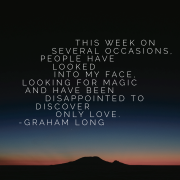 From about fifty feet away, a booming voice yelled, “Is the complaints department open yet?” “No” I responded, unable to match the volume coming at me. “I never take complaints before the first cup of coffee”. The voice could register on the Richter scale and I wasn’t sure it was friendly until I was right beside a bloke that looked like he’d lived rough for a long time. Although the face was uncared for, a smile communicated wonderful warmth. I sat beside him and it became clear that he was just happy to talk to me for a while. When I got up to walk away, he said, “I’ll save my complaints for another day”.

How disappointing love can be. I remember when my son was little, after a rough day I’d rushed home without a chance of buying him one of the little surprises that I’d normally have with me. He searched my pockets and could hardly believe that he found nothing. I tried to calm him by saying, “Dad doesn’t have any lollies or surprises today, I only have love.” He threw the biggest tantrum imaginable. Countless times since then I’ve brought discontent when all I had to offer was love not lollies; presence not presents. It’s especially hard when someone asks me to fix something that I’d desperately love to fix. Then I’m a disappointment to myself. When my son died, I was helping his widow get the kids through the bath one evening and our four-year old looked at me with a hopeful face that I will never forget. “Can you bring my Daddy back?” she asked. I was shot in the heart and stayed that way for days because there is nothing in this world I wanted to do more than bring her Daddy back. It took me ages to realise that I could do no more for this precious girl than I could do for anyone else. I could only be with her. I was living in the shock. I was living in the disconnect of the unthinkable. I was living in the powerlessness and the broken heartedness of love. How I wish I was superman, faster...[read more]
By Graham Long
Words from the streets of Kings Cross