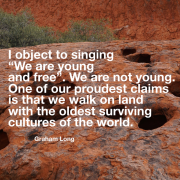 That we live in such a peaceful, prosperous part of the world is the achievement of very few of us. Most should leave some space today to thank someone else for such good fortune. Today I offer my thanks to a young bloke, starving in the potato famine in the county of Tipperary, Ireland. James Long’s father was an alcoholic, which must have added a level of misery to what was already an unbearable situation. The young James made a drunken goose of himself once at a funeral and decided from that moment on that he would never drink again, and he never did. Rumours of the gold fields in Australia must have sounded like a fairy tale to this poor Irishman at the bottom of his social ladder. All around London at the time there were signs on boarding houses that said, “No Irish”. Any chance for a life out of starvation must have seemed to be worth a shot, even if that meant a boat trip that would take months, to a destination far away from everything he knew and with little or no prospect of return. From this desperate situation and from this radical decision, much of the “luck” of my life was set in place.

James arrived in Ballarat, Victoria, and discovered many things about this strange place. He found just enough gold to start a small business making cakes and confectionary for miners. In due course James Long Confectionary employed 140 people with factories and offices in Perth and also New Zealand. The alcoholic father got news of his son’s success and decided he too would make the journey to this country. One day in a pub near Ballarat, after drinking all day, he rode his horse to the edge of town and fell to his death. The local paper wrote a story that marvelled that he had managed to ride as far as the edge of town at all. The business of James Long eventually became the Sunshine Biscuit Factory and James died one of Victoria’s wealthiest citizens. What a pity none of that wealth got passed down through the family! Funnily...[read more]
By Graham Long
Words from the streets of Kings Cross