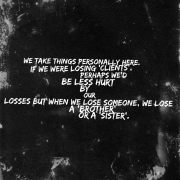 Heroin appears to be purer than it has been in recent times with the shocking consequence of overdose and death. A young bloke was with us yesterday, making real progress and expressing hope because he could begin to believe in a constructive path ahead. This morning he died. I sat with staff who openly wept. Apologies were offered to me for the tears, but in truth, if ever what was best about Wayside could be materialised and bottled, it would be those tears.

We take things personally here. If we were losing 'clients', perhaps we’d be less hurt by our losses but when we lose someone, we lose a ‘brother' or a ‘sister'. Another staff member was in my office just minutes ago, struggling to come to terms with this particular loss. He told me that the deceased man had last night asked him for a cigarette on his way home. The staff member roused him for putting him in a situation where he was asking him to break a Wayside rule, but he gave him a cigarette anyway. It was probably his last cigarette. Our staff member may have been off side with our rules but he was right in the centre of wisdom. It’s not often a staff member shares with me that he found comfort in breaking our policies. 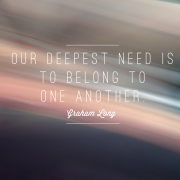 “Torrid” is one way of explaining life here just lately. We had a fellow attempt to take his own life with a rope although he fell into the capable and compassionate hands of Una before he came close to doing himself damage. Another dear lady, under the influence of ICE, suddenly produced a knife and threatened two of our staff. The saddest part of this situation was that she was threatening the person who loves her in this world the most. I’m thankful for highly trained and disciplined staff members who handled this according to long-practiced policy. The person was soon enough contained behind a locked door. Police responded quickly and soon enough the lady was in custody and on her way to psychiatric help. To top off a busy few days, on Sunday while our little church was on, a lady at our front door suddenly produced a knife and cut her own arm open causing a dramatic, spurting bleed. If that was me, I would have fainted, but this lady ran, fast. Our staff who were concerned that excessive blood loss could be fatal, also ran, fast. The outcome was a quick resolution where medical care and psychiatric care were put in place. Fabulous work on the part of all our people but you’ll understand that while they look pretty relaxed, they are on their toes all the time.

Quite often, members of our inner circle write back to me with stories that resonate with something I’ve written. I have to share this one with you (with permission) because it made me laugh out loud.

Dear Graham,
I always love reading your "Inner Circle" letters. When I read your comments on rules in the latest one, "wisdom is a tricky business", I thought you might enjoy this little story. I went to mass yesterday for Ash Wednesday and because it's a day on which Catholics come out of the woodwork to go to church, the church itself filled up quickly and the overflow was directed to a hall underneath. We were sitting on chairs waiting for the priest...[read more]
By Graham Long
11
Feb
2016
Community/News & Views 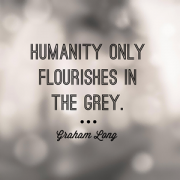 A rather well-dressed man made an appointment to speak in my office. We’d never met but he’d been part of this inner circle for some years. A man who had accomplished much found himself unable to cope with a work colleague. He described what certainly sounded like some pretty unfair events in the recent history of his workplace. Even so, the emotion seemed to loom larger than the events themselves. We chatted for the best part of an hour. I should say, he chatted and I mostly listened. For some reason that I can’t remember, the man began to talk of his mother. It became clear that nothing in the work place matched the trauma this man knew with his mother. I was amazed as a story of abuse unfolded and became darker and darker, including an event when his mother held a loaded gun to his head and claimed the right to end his life if she so chose. Suddenly and without any prompting from me, that man said, “I’m getting these two stories mixed up aren’t I?” It was a revelation that surprised him even as the words came out of his mouth. A thoroughly good man revealed his own secret to himself and left determined to do better with his difficult colleague. He gave permission for this story to be told as not even his close circle would spot his identity here. What a blessed and privileged life I lead.

At Sydney airport recently, I made a visit to the men’s room. I washed my hands and noticed as I turned the water off that the tap had a spongy feel, almost as if the tap was not firmly attached to the basin. It was not worthy of a look or a second thought. When I was about 10 steps away, drying my hands, a loud voice yelled, “Hey you!” I looked to see a rather tall man who appeared to be looking at me. “You must turn off the tap,” he yelled. I noticed that a tap, presumably the one I used, was still running slightly. I was surprised enough to hesitate for just a moment but the man increased the volume. “You must turn off the...[read more]
By Graham Long
04
Feb
2016
Community/News & Views/Religion 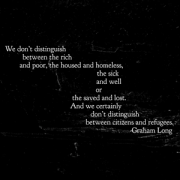 A wave from The Wayside Chapel
Dear Inner Circle,

Walking through the café yesterday I saw a man spot me and raise his hand high. His rather lovely face lit up because someone had told him I was too busy to come down and have lunch with him. I was too busy but suddenly my agenda evaporated. It’s funny how an authentic meeting between two people just melts away everything else. In my social work days I was a fanatic for a system of analysis called, “transactional analysis”. For quite some time, every encounter I had with people was analysed according to this system that imposed a framework of meaning onto every act of communication. At the time I didn’t see it, but it caused me to develop a language that was not really human. It caused me to be more interested in finding meaning than finding the person in front of me. I was a problem solver in those days. My naïve religious outlook back then was that Jesus must have been a social worker too. In due course I could see that Jesus was nothing like a social worker and no matter how you analyse his encounter with the woman at the well, he simply broke all the rules. He’d certainly not get a job in any agency I know of. Anyway, this lovely face lit up as he bought me lunch. With great ceremony he handed me $20, telling me that it was a debt he owed me. I had no memory of any debt. He explained that he was robbed at an ATM about a month ago and I lent him $20 to get him through that weekend. I know this man just lives on a small allowance that the public trustee provides and so I said, “But there is no need for you to buy me lunch.” His reply was, “But that’s what friends do”. Lunch was a celebration of many good things.

So our High Court ruled yesterday that our government does not commit an illegal act when it keeps people in detention overseas. I have some understanding of the complexities facing our government when it comes to controlling our borders, I’m just bewildered and wondering what happened to the Australia I...[read more]
By Graham Long
Words from the streets of Kings Cross