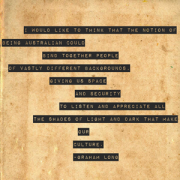 While our city painfully mourns the loss of Curtis Cheng and wonders how a 15-year-old boy could take the life of a stranger, we find bewilderment and fear levels have lifted in our cultural atmosphere. Also bewildering is the number of people who suddenly appear as experts in terrorism and chat away on radio or TV as if we all accept some common understanding of the phenomenon. Surely this is not so. “Terrorism” has to be one of the clumsiest words in the English language. “Terror” describes a feeling. It gives no information about the cause of the feeling. It’s little wonder that every combatant in every struggle, calls the other side, “terrorists”. The clumsy nature of this language means that everyone is using the word correctly.

We pay a price for using clumsy language, not least is that we fail to recognise the grounds on which some resort to violence. We’re left thinking that there is a peculiar set of people who enjoy inflicting suffering on others for no reason. Thus we have no ground on which to criticise the actions of our own
government nor recognise overreach on our part. 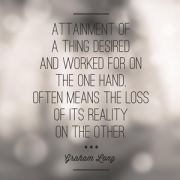 Chatting to a fellow at the front of our Op Shop I suddenly noticed some colourful flowers. I’m not the most observant person in the world, but I was pretty sure that the flowers must have been planted overnight. We don’t have volunteers who tend the garden overnight and this was a mystery. I didn’t mention the flowers but my face must have communicated some confusion. “Do you know Clover Moore?” the man asked. “Sure I do,” I replied. “Well, you should ring her and thank her for the flowers” he said. “Gosh,” I said with an ever increasing sense of mystery, “Why would Clover donate a single little bed of flowers like that?” “Oh,” said the man, “She doesn’t know she made the donation!” It suddenly occurred to me that the City of Sydney has had rather wonderful flower displays erected in the main street. If Clover or anyone from the City of Sydney is reading this, I offer my apology for your “donation”.

A weedy little bloke approached me just a moment ago. “Graham! I haven’t seen you in a year!” I was wondering if we had ever met, when he helped me by saying that I had officiated at his wedding ceremony. Slowly his face seemed approximately familiar, although the woman at his side seemed not to fit with my memory of the bloke. He quickly explained, in front of the woman, that his marriage had lasted only weeks. The necks and shoulders and arms of both people looked like they were covered with what we used to call “hickies” when I was young. Either these two had been involved in some extreme kissing or both of them had fallen into a pit of set rabbit traps. To my astonishment and still without introducing me to the woman at his side, he explained how many women had fallen pregnant to him in the past year. I stopped the conversation in order to introduce myself to the woman and to learn her name. It turns out this relationship was just days old and yet I could see its end looming. I walked away...[read more]
By Graham Long
01
Oct
2015
Community/News & Views 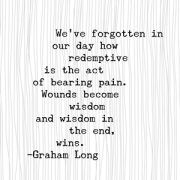 A 13-year-old boy came to Wayside with his Mum yesterday. He had just completed his Bar Mitzvah and had chosen to give the money raised on the occasion to Wayside. Not only so but he had managed to get a lot of toiletries and other things that we love here and I had the honour of meeting him and accepting this gift. I really enjoyed sharing something of how important a Bar Mitzvah is to a Jewish family and I was keen to hear all that was required of him for the event and what it meant to him. Religious or not, you have to admit that the Jewish people know how to do this rite of passage placing both a burden and a large parcel of dignity onto young, developing shoulders. Thank you Benjamin, “Son of my right hand”. If you keep your faith married to your sense of compassion for humanity, you will indeed be a blessing to your religious community and to Australia.

A rare breed of man sat in my office this morning. I have his permission to tell this story. This is a man with a superior intellect who has made much wealth because of his ability to analyse a situation and then act according to reason. Rare indeed. Most of us use our intellect to rationalise what we have already done. So this fellow has a younger brother who married a woman who is by any measure, narcissistic. He has watched his brother collapse from being a fun-loving fellow to a hollowed-out shell as he attempts to meet the impossible demands of his wife. The brother has gone without many things while the wife has a shoe collection that requires its own room. The bottom line is that my friend, after careful analysis, had decided that his brother should leave his wife. He expressed his view to his brother, and as a result the relationship with the brother is close to collapse. The older brother cannot understand why his younger brother wouldn’t be responsive to the application of his considerable intellect. Once the analysis is made, what possible cause could there be not to...[read more]
By Graham Long
Words from the streets of Kings Cross