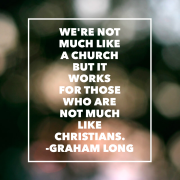 A bit of banter about Bondi Beach
Dear Inner Circle,

Surprises abound at Wayside. Some of the loveliest things happen in a way that is quite out of order. Luckily people are generally not problems to be solved but people to be met and so often the least likely turns out to be the wisest. It’s why at our little Sunday morning church service we adore the little lady we call, Saint Interruptus. She and I have become something of a double act. Once I noticed that we were running a little over time and so I said, “I’ll pick up the pace here, I don’t want to bore you.” “Bore us!” she said, “That’s your job!” Sunday just gone a dark-skinned Aboriginal man decided unannounced to play us his didgeridoo. He stepped up to the altar and rested his didge near a microphone. It was an incredibly beautiful and moving gift he made for us. The dear Uncle however, had some time ago, had his own precious didge stolen, so on Sunday he played on a pipe from a vacuum cleaner. It may have been the first retractable didgeridoo in 40,000 years to be played in this country. A couple who had been with us that day, showed up on Tuesday this week with a brand new didgeridoo. When I gave it to our dear Uncle he melted in my arms and wept for some time. There is a good chance this Sunday that the happiest Aborigine in Australia will lead us in devotion with his beautiful new didgeridoo. We’re not much like a church but it works for those who are not much like Christians.

You’ve heard me talk about Wayside’s expansion to Bondi Beach a few times over the past year and I’m happy to tell you that from 1 July 2016, this will officially become a permanent arrangement. Chapel by the Sea in Bondi Beach will come under the governance and management of The Wayside Chapel and as of tomorrow, we are one strong organisation serving the community in multiple locations. This means that Wayside has full governance and management responsibility of the Community Services Centre at Norman Andrews House and the...[read more]
By Graham Long
23
Jun
2016
Community/News & Views 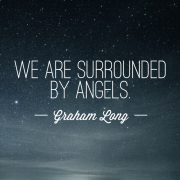 Here is a cracker of a story. We are surrounded by angels. Some of our supporters set aside money so that they can jump in when the circumstances are extraordinary and when the need is way beyond anything Wayside could do. Years ago, one of these angels told me he would be willing to pay the rent on a flat for a year if I knew someone for whom it would make all the difference. A man who had lived on the street and in the grip of alcoholism was showing the early signs of transformation. He’d stopped asking, “What can you give me?” and started to ask, “How can I help?”. It’s always a sure sign of a miracle on its way. Our dear angel paid a year’s rent and that man is free today of his alcoholism and flourishing in a job that he loves. Amazing? Absolutely! This week that same angel did the same thing for another fellow who I judged to be a good bet. This morning I looked into the face of a man whose physical features had changed overnight because he’d slept in his own bed in his own place. He was in today seeking help to enroll in a course that has a good chance of seeing him into employment. The transformation has begun not just because of a physical room to call his own, but because someone believed in him and was prepared to back him in this way. Amazing? Totally!

“My cup runneth over” is a phrase our past Governor used to say to me regularly. If you’ve ever met Dame Marie Bashir, you’ve had a brush with grace. Every time I see Dame Marie, she expresses her gratitude and awe for something or someone. I was in our lift once with Dame Marie and an Aboriginal women got in with us. Dame Marie said, “Every time I meet a woman such as you, I just want to say, ‘thank you, thank you, thank you.’” Well my cup runneth over too. Today I spoke with a high profile person who regularly does a shift on our front desk. He’s the last person in this city you’d expect to see taking people for showers or finding changes of...[read more]
By Graham Long
16
Jun
2016
Community/News & Views 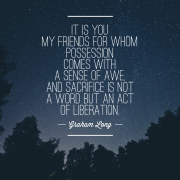 A little card, not much bigger than a postage stamp, which read, “To my darling daughter. Happy first birthday. Love from Dad”, was all that a young woman had from her father. She is 22 years old now and recently discovered that the father she had not seen since she was a little girl had recently died. All she had were lots of questions and an ache for connection. She discovered her father had a connection to Wayside and went to some trouble to make contact with me. In last week’s note I anticipated a meeting which took place last Friday evening. Am I the luckiest man in the world? It was holy ground where I spoke for hours about the Dad she didn’t know. I assured her that her father was a good man who was well loved and who made a wonderful difference to our community. I presented her with a “book” that he had written to her. There were perhaps 20,000 words written by a man who was largely illiterate but who sat with a one of our volunteers for hundreds of hours in order to leave behind a record of his love for his little girl. Our volunteer has since moved out of Sydney and I worried whether I still had a connection to tell her this story. Thankfully, she is still in this inner circle and she made contact with me on Saturday. She said that she barely hoped to believe that one day the daughter would have all this work in her hands and be able to receive this gift of love. Thank you Fran. You are truly an angel from heaven.

A man who has lived in his car with a little dog for a year was allocated housing this week. What a difference a day makes. This is a softly spoken man who actually asks nothing of anyone. He is a proud man whose sense of independence has seen him struggle but survive and even thrive through a life that had few, if any, free kicks. He has the most devoted little dog in the world. He could command his dog to stay and walk away for the day and be certain that the dog would be waiting for him. He looks like he...[read more]
By Graham Long
08
Jun
2016
Community/News & Views 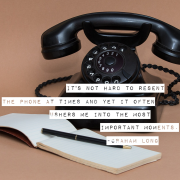 At the end of the line
Dear Inner Circle,

The most adorable three-year-old in the world was playing with my phone yesterday. She asked if I could find some pictures of Grandma. I started flicking through the photos on my phone and we came across one where I was wearing my alb and stole at a wedding. This dear little girl had never seen me dressed this way and it startled her a bit. “Ooh! Are you Captain Feathersword?” she asked.

It’s not hard to resent the phone at times and yet it often ushers me into the most important moments. A man called me this morning from his hospital bed. “This is it Graham, I’ve had enough”. He spends three days of every week undergoing dialysis. While his life is absorbed with this never ending exercise to stay alive, his wife has left him, and his children have been removed from his care. He told me that he can’t fight all of these battles and be chained to a dialysis machine for half of his life. “How long will you live if you stop this treatment?” I asked. I could hear that he must be in the presence of some medical people and they prompted him to give the answer, “days”. I so get it. I don’t judge this bloke. I’m not sure what I’d do in his situation and I offer no judgement. If he goes, I’ll be at his bedside as he passes. I think he’s had enough and I respect his choice. 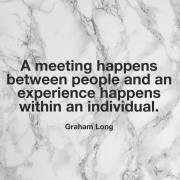 Lots of perspiration and a touch of inspiration
Dear Inner Circle,

A good mate sent me a text this morning to say that he’d found a homeless man near where he lives and offered him a perfectly good doona so that he could be warm at night. The homeless man refused the offer by saying, “Sorry mate. I’m downsizing!”

First thing yesterday I spoke to a hundred or so Year 12 boys at a large Catholic school. I don’t normally do this kind of thing because there are others here at Wayside that would do a much better job. The teacher who invited me could ask me to speak at the South Pole and I’d grab a jumper and be off. I first met her when she was the eldest of five children, homeless because of unthinkable domestic violence. I found refuge accommodation for the family and in due course assisted in finding public housing. This senior teacher was just 13 years old when we first met. The battle she had just to do her homework would have discouraged anyone. On the day she enrolled in university, I was by her side to support her. On her graduation day, I was there taking the part of a proud father. I performed her wedding ceremony and baptised her child. Is there any man on earth who knows such blessing? She’s now around 40 years old and to see this competent, respected, senior teacher yesterday was such a special thing. She introduced me to the school and I hesitated for a minute, waiting for Jesus to enter the room. What a wonderful day.