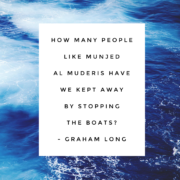 Amazingly, culture seems to hold memory that has an affect long after the memory of actual events has passed. Isn’t it astonishing that children still sing, “Ring-a-ring o' roses, a pocket full of posies, a-tishoo! a-tishoo! We all fall down.” This rhyme was first published in 1881 but its origin seems to be much earlier. In the days of the Black Death or in the great plagues, it was believed that the plague could be caught through the sense of smell and so people carried rose petals in their pockets, but as soon as someone began sneezing, “we all fall down”. It is believable that this song is a living memory of the many plagues that swept Europe in the seventeenth-century. In 1665, nearly a third of London’s population was lost to the plague. That the great fire happened the next year makes me think that anyone of my age, has had a pretty lucky run. No one remembers these things yet we still sing the song.

This country began as a British prison and church attendance was essentially a punishment imposed by the establishment upon uncivilised prisoners. The early magistrates were often parsons who were rarely noted for the depth of their compassion. Rev Samuel Marsden was known to impose 500 lashes for relatively minor offences. It meant that an offender would be lashed until their back was pulp, carried away until their back healed and then returned for more. It might take five sessions before the sentence was completed. Do you think this early memory is not retained in our culture? We’ve long forgotten Marsden but when clergy are portrayed on TV, we usually see a sanctimonious character that is usually privileged and either pathetically irrelevant or viciously narrow. 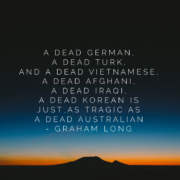 Exactly a year ago, I stood in the battle field of Fromelles, France. Fromelles was of particular interest to me because there was such shedding of Australian blood there. I’m not sure if bloodbaths ever have redeeming features, but this particular battle it seems, was designed to achieve nothing other than a distraction. It was hoped that this battle would prevent Germany from sending large numbers of their soldiers south in preparation for the massive culmination to be known as the Battle of the Somme. The plan failed. Fromelles was so poorly executed that Germany quickly recognised it as a decoy and moved their troops south anyway. Some of the soldiers killed at Fromelles had fought at Gallipoli but many were fresh from Australia with no fighting experience. I stood for ages in front of the grave of Private John Gordon, who enlisted in his older brother’s name, and who had landed in France in June 1916 and died on this field a month later. He was fifteen years and ten months old.

Very few Australian families a hundred years ago could imagine, let alone visit, the places where I stood last year. At Pozières, near the famous windmill sight, I found you could wander into any of the peaceful-looking fields, which were at the time freshly ploughed, and fill the boot of a car with shrapnel if you were so inclined. One hundred years later and still the ground is peppered with metal, now twisted and muddy, but then white hot and cutting through flesh like a butter knife. How many thousands of Australian people had wished to have stood where I stood, trying to understand what kind of circumstance robbed them of their boys, husbands and fathers? Many times, I stood quietly and shut my eyes as if I was communicating with thousands of Australians now gone, to say, “This is where it was”. Standing in peaceful fields, it’s hard to imagine soldiers deafened by artillery night and day without a break, wet, muddy and waiting for an order to...[read more]
By Graham Long
12
Apr
2017
Community 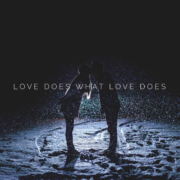 All my life, I’ve nursed a special fear of needles. Never for a minute did I entertain the idea that I might put a needle into someone that I loved. My son became a diabetic when only six years old and while he was adjusting to the idea that only needles would keep him alive, I was adjusting to the idea that I’d have to learn how to give him injections. The day came when he was about to be discharged from hospital and I had to demonstrate that I could draw up insulin and inject it. I sat my little boy on a bench and gave him a long lecture about how, if I could only make him live by injecting into myself instead, that I would surely do it. It was no metaphor. After my longish lecture, I pushed the needle into his leg. After pushing the plunger, I withdrew the needle and threw my arms around my dear boy, stabbing him in the back. I thought I was the worst father in history.

Years later my daughter was wheeled out of an operating theatre to a bed where I was waiting for her. Initially she looked ok, but in just minutes, her face turned a sickly yellow with stark blue lines across her face, almost like a road map. I panicked and called for help. A nurse fetched a doctor who looked at my girl and proclaimed her to be “fine,” without even hesitating on his walk past her bed. I was both relieved, wanting to think the best of his professional judgement, and also horrified that he didn’t seem to understand that this was the loveliest little girl in the world, who in my view, ought not look like a road map.

A four-year-old girl stood next to her mother who had come to see me about a relatively trivial matter. The face of the little girl! Anger, fight, sadness and resentment all were clearly present in the face of this baby who clearly didn’t want to be in the room. I knew this little girl, somehow. My heart leapt from my chest at my first glance. This meeting happened many years ago and today, this little face is still with me. She didn’t speak and I’m not sure she could speak. She made noises. She seemed to be keeping her hands behind her back. “What’s going on with this little girl’s hands?” I asked. The mother pulled one of the hands to the front to reveal burns in the pattern of clear concentric circles. The little hand was dreadfully blistered. I could only imagine these burns came from a stove cooktop. I looked with horror to the mother’s face and she said, “She tells lies!”

I tell you that story because I’ve just been similarly captured by another face that will no doubt live with me to my dying day. Today I met a young person, perhaps in their late teens or early twenties and we struck up a conversation about gender identity. The words we exchanged were of peripheral importance to this meeting. Speaking was difficult, a stammering mixed with the sounds that a toothless mouth makes when forming words. But the face! Parallel lines met today. I know nothing of the backstory and yet I know everything. I lost something today. I lost all the things that I was worried about on my way to Wayside today. I lost my health issues; I lost the agenda of my next executive meeting; I lost the philosophy that I’d read last night, but I didn’t lose me. Actually, I found me in this precious face, contorted by hurt and yet with warmth and presence. My contribution to this meeting was nothing and everything. I gained nothing and everything.