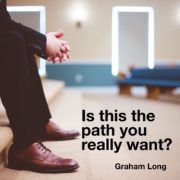 Surprisingly, a middle-aged, successful man sat with me this week, confessing his stupidity. He is not a stupid man but like an astronaut who from a rocket looked back at the earth for the first time, he looked at his life with some degree of astonishment and wonder. He told me that all his life, the more he met others, the more he became bound up in himself. Every meeting was an event that happened inside him. This is a tall, good-looking, successful, rather lonely man. A while ago he was giving a lecture to one of his kids, trying to make a point about how heavy his responsibilities were and how much he’d sacrificed for his children. His daughter rather innocently asked, “Is this the path you really want, Dad?” The question tore the heavens open, not because he suddenly needed to think about alternate paths but because his daughter rose up from being a kid, to a real, living person, joining her Dad in proximity and speech. It was like he’d never met her until this moment. A member of our inner circle for a long time, the man sought me out to have a couple of discussions. Slowly he’s beginning to know that his, “I” is not located “in” him but between him whoever he meets – ‘meets’, rather than ‘manages’. This man is respected in his profession but he’s not so much at home. There may be a difficult road ahead and some bad habits to be confronted. Maybe, perhaps, possibly, new life is on the way.

Only four times a year, the Wayside staff meet as one group. Last week in our staff forum we recognised that since the State Government asked us to extend our hours to 10:30pmeach night (and fund the cost of this change) we have been surprised by the number of...[read more]
By Graham Long
15
Feb
2018
Community 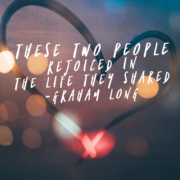 In another time, one of our staff members once worked for a racist regime. As a little boy, he was raised a racist. Eventually he entered a military force that trained him and rewarded him for unleashing hate and devastation in the cause of the racist regime. In his elite unit, there was one group hated even more than black people and that group was the white people who aided the blacks. He was taught that these people had turned their backs on their own kind. Our staff member has come such a long way. To see the affection he has for our Aboriginal people is always breath-taking for anyone who knows his back story. Yesterday in one of his tour groups, there was a person from his old country and a leader of the despised group that aided black people. Years ago he would have been greatly rewarded for this person’s head. What a situation! At the end of the session these two people rejoiced in the life they shared and the lady asked our staff member if they could hug. That image will never leave me. Right there was our vision embodied of ‘Love Over Hate’.

The other night I was walking past the Gazebo in Potts Point on my way to the car. I saw what looked like a young man placing a curse on a plant near the entrance to the bar. He was pacing from side to side and waving his finger while a torrent of words that sounded like abuse, flowed. I went a little closer to see if I knew the fellow or if I could help in some way. Close up, it was clear that I was witnessing a domestic argument. From what he was saying it seems that the plant had been sleeping around and he’d caught it out. The funny thing was that the wind was strong enough to make the plant shake, as if in response to the man’s fury. I figured I had no evidence of the plant’s unfaithfulness or otherwise and it was better for me just to walk past. 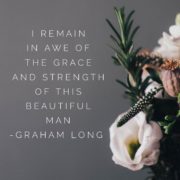 Walking through the main street with Wayside's Assistant Pastor, Jon Owen yesterday, a woman yelled out, “Hey! You’re too se*y to be a priest!” I’ve got a sneaking suspicion she was talking to Jon.
If you’re inclined to be obsessive, Wayside is a place that will either cure you or send you around the bend. To this day, significant things appear and no-one knows where they came from and significant things disappear and no-one knows where they went. In the little kitchen near my office, one of our staff members was lamenting that a piece of her property had disappeared. She told me how she had spent good money on this item and then labelled it in such a way that no one could pick it up and mistake that it wasn’t her property or that it should be removed from this particular kitchenette. I really desired to share her bewilderment and rage but instead I confessed that I’d just raided the fridge and taken a piece of bread, toasted it and raided someone’s butter from the fridge and then opened someone’s Wayside honey. It was lunch and I was still eating it. I could hardly feel indignant with my hands full of stolen goods.
Keep reading here.
By Graham Long
01
Feb
2018
Community 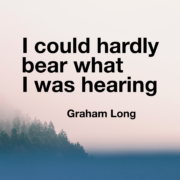 Every genuine meeting has an element of surprise. Talking to a young mum this week, we both marvelled how her two-year-old daughter, pointed her finger in the air at her father and said, “You’re a silly b*gger!” As a young parent I was often surprised by how fast our children learned our good and bad habits. Surprises are of different orders. This week a meeting surprised me to the point of paralysis. A woman who’d made an appointment to talk about her extended family, poured out her heart with story after story of her own childhood. In this territory perhaps I’m hard to surprise but on this day, I could hardly bear what I was hearing. One story led to another. It was not the unfolding of one story upon which the lady was determined to tell at length, but rather one story seemed to spark another from another time and with a different form of abuse. I felt like I was doing a few rounds with Mike Tyson. Here was a woman who, for most of her life, has been treated with less respect than we’d give to an animal. She was abused by men whose only motive was to cause her mother suffering to see her child abused. The child herself was not considered human. Yet, I was captured by something awesome in this moment. The woman and I were present to one another. I didn’t know anything except I was there and she was there. She was not me. She was no projection of mine. She was no ideal of mine but she was there, real and with me.

We meet on a narrow ledge when we meet. On each side of the ledge is an abyss. On the one side is the abyss of individuality. In falling into this bottomless pit, all we care about is our desire to experience and our desire to use. People are of interest only to the extent that they yield a certain experience in me, or because they are useful...[read more]
By Graham Long
Words from the streets of Kings Cross