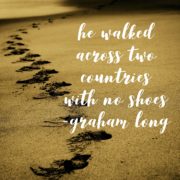 A young girl from South Sudan was separated from her father when one of the armed militias that roamed the country beat and imprisoned him. The girl thought that her father was dead. She and her mother and siblings had to do all they could to survive without their father. They found shelter in a derelict house that had no roof and because the mother couldn’t feed all her children, the little girl and her big brother were sent into Nairobi to beg or to eat as best they could from rubbish bins. The little girl was only ten years old at that time. While she was doing her best to survive, so too was her father. After he was captured, he was put in a hole in the ground with a steel grate across the top. He shared that hole with twenty other men for six months! In due course another militia invaded this area and set him and the others free. Running as fast as he could, he headed straight into the arms of a third militia who were suspicious of his story and locked him up again in another hole in the ground. After months of unspeakable punishment and abuse, this man was eventually released. He walked across two countries with no shoes, sleeping in trees at night time to avoid lions. He had no idea if his wife and kids were still alive but he kept going and sought asylum. He was granted entrance into Australia in 1998 and I was part of the team who welcomed him into the community. It took two years and a superhuman effort, but we were able to locate this man’s wife and kids and reunite them with their father. A beautiful African face captured my heart this week in the crowd of people who came to register at Wayside as volunteers. It was this same little girl, now a beautiful woman. Today she is a registered nurse, giving professional and compassionate care in the medical system of this country and soon to be a volunteer at Wayside.

A good life isn’t necessarily a lucky life. Our chapel this week, filled up with people who spilled out of the building for the funeral of a woman who had spent most of her life on the street. She’d had a tough life. Most of the people who attended were those who had lived on the street. The voices we heard that day were those never heard in the normal course of life. How precious is a moment when the unheard voices are heard. Person after person told their story of life on the street and most had lost their families at a young age. One after the other they testified that this lady had become “Mum” for them. It was sacred and at times funny. One bloke testified that “Mum” hit him on the back of the head with a lantern once. “But it wasn’t my fault” he said. Pointing to another bloke in the congregation he said, “It was your fault because you were in front of me and you can’t run fast enough.” Everyone present understood that although “Mum” had a temper, she also had a deep well of love, from which an untold number of people found a sense of comfort and worth.