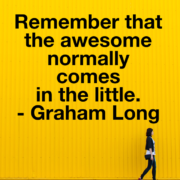 The Awesome in the Little
Dear Inner Circle,

As the finish line looms closer, I’m noticing things that I’ve always seen. A tall, skinny bloke in his thirties, made a direct and quick approach this morning as I walked into Wayside. His hand was stretched out from about four metres away. As he came closer I noticed he wasn’t smiling, so this wasn’t a “farewell” or “well done” but something more serious. In one of this world’s longest hand-shakes, he told me that yesterday a mate had told him of a free feed that was on offer in another part of the city. He described a generous meal that was set before him, “But”, and here came the weighty part of his news, “They began preaching at us.” Still in the one hand-shake he told me that he was humiliated. “Why couldn’t this Christian just make a gift? Why did they have to preach at us?” The final part of the speech was, “I’ve come to Wayside for years and I’ve been helped, I’ve showered and I’ve eaten here many times and no-one has ever preached at me. I just want to thank you!”

I’m noticing that tiny comments are sometimes acts of love. This morning I carried a coffee that I’d bought in the street and a Wayside regular said as I walked past, “There is an ingredient in that stuff called, ‘productivity’”. It made me remember that years ago this same fellow was part of a crowd that witnessed us giving some of our Wayside honey to a Premier of NSW. As the Premier graciously accepted the jar of honey, this fellow yelled out, “Be careful, there is truth serum in it!”
read more
By Graham Long
Words from the streets of Kings Cross