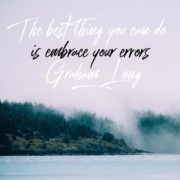 There is Nothing Permanent Except Change
Dear Inner Circle,

Unreserved joy and support has flooded in all directions since we announced that Pastor Jon Owen would be my successor as CEO and Pastor of the Wayside Chapel. Months ago I had a conversation with David Gonski who is often referred to as, “The Chairman of Everything”. He asked me who my successor might be and at that point, I had no indicator about where our Board’s exhaustive process might terminate. He said, “Don’t appoint a manager. Appoint someone who is inspirational.” I indicated that his response surprised me, as he knew how large Wayside had become. He followed up by saying, “You can teach an inspirational person to manage, or you can hire the right skills to help them, but you can’t teach a manager to be inspirational.” My spirit soars because our Board chose an inspirational person to lead Wayside into the future.

Thank you for the hundreds of messages of thanks and congratulations. It is such an honour to be stopped on the street by so many who just want to wish me well. The only compliment that’s hard to hear is something like, “Well, you really built an empire.” I have no defence to this statement as clearly we’ve grown dramatically, but we’ve only grown because in this age where some people are busy building walls, our mission of creating a community with no “us and them”, captures people and speaks to a deep longing for a better world. If I leave behind executives or managers who are set on growing their empires, I’ll nurse a sense of deep regret, for we who have been captured by the awesome become the greatest of all human contradictions when we think we have a franchise.