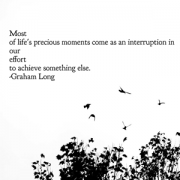 It's all about the presence
Dear Inner Circle,

Normally bright and positive, I saw a young fellow lying flat on our café floor yesterday. Several times our staff or volunteers asked him to get up and sit at a table, as they should. In the afternoon I saw him sitting alone, his facial expression was deeply distressed. He explained to me that a few days ago, he had several ribs broken while he was, “assisting police with their enquiries”. It’s not hard to imagine him being cheeky with police. This young man was in dreadful pain. He’s sleeping rough and there is nowhere for him to straighten out to rest. He’s had a couple of nights sleeping in a friend’s car but its been impossible to be comfortable. Years ago I came off a motorbike and broke all my ribs down one side. The memory of that agony revisited me. I remember living in fear that I would cough or worse, sneeze. I remember trying to turn in bed and I had a comfortable bed. I had Robyn to help me move and feed me. I invited the man to the fourth floor where one of our meeting rooms has a large lounge. I worked from that room for an hour and a half to give him some rest. He went out like a light and I felt dreadful waking him when I had to go to my next appointment. As I lowered myself to bed last night, my poor brother was on my mind and in my heart.

Most of life’s precious moments come as an interruption in our effort to achieve something else. I admit to almost running through our café at times in the hope I can move from A to B. Ducking and weaving toward my office a giant of a man called, “Rev”. Almost reluctantly I turned to look up into the face of this big bruiser who only wanted to hug me. I embraced him and he said to his mates, “I can’t believe the Rev gave me a hug”. A woman just 6 feet away and not with this group of men stepped over and said, “Can you hug me too Father?” As I put my arms around her, she said, “I’ve been diagnosed with stage 3 cancer.” She put her head on my shoulder and brought a hand up to support her head. We hugged for perhaps 30 seconds. Without further words we parted but she was mopping up her face as she walked away. I can’t remember now what so important that I nearly missed these precious moments.