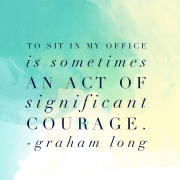 I once was blind
Dear Inner Circle,

To sit in my office is sometimes an act of significant courage. A big strapping man sat with me this week and struggled to tell me of his childhood. He was brought up in a string of religious children’s institutions where fear and brutality were constantly present. Over the years he’s hated anything that had the mildest sniff of religion because it just wakes up memories of loathing. An ocean of resentful feelings filled the room and yet he was bewildered that he had come to a minister to talk and seek understanding. He told me at one point that in those years, most of the beltings he received were from ministers. He told me how he had come to a church service once with his socks turned down. It was against the rules and the minister thrashed him and sent him to spend the morning in the toilet. My heart broke. I could see the little boy as I was hearing the story.

I once would have tried to explain away the violence against children perpetrated in our culture and especially that of religious institutions. I used to tell myself that those who ran such places meant well or that the world was different then. But brutality is brutality no matter the ideology or theology of the brute. We’ve been shocked in recent years by a Royal Commission exposing our blindness to the sexual abuse of children, but as hard as it might be to contemplate, all of this was a subset of a more brutal history.