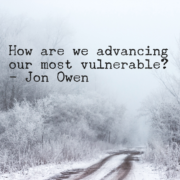 This week you have me again, Jon Owen, Wayside’s Assistant Pastor, stepping in for Graham Long. Thank you for welcoming me into the space you share together. Graham is recovering well and looks forward to sharing with you next week.

“Jonny, got a dollar?” My pockets were empty so I offered him a chat instead. This kid had sent us all into a spin when he inexplicably disappeared for a few weeks. The alert that he had gone missing was raised after a friend who hadn’t seen him for a while spotted him eating out of a bin in another part of the city. A few days earlier I’d stopped by his mum’s house to check in on him. I was met by her new boyfriend at the door who told me that the kid was “doing his own thing” for a couple of weeks to give them some space. He was 11 years old.

I was relieved to see this little fellow was safe and I told him how worried we’d all been. He shrugged, laughed his absence off and quickly moved the conversation along. His keen mind skipped around a variety of topics, using language filled with colour and regularly returning to the phrase “deez nutz” for comfort. The expression sailed right over my head, a clear sign I’m getting old. Much like a Sunday drive on a winding country road, our chat casually covered some ground and just when it all began to feel a little familiar, he steered it around a sharp corner. “I don't think anyone actually plans to have kids, they just happen and then they get in your way”. Then his mouth was off again in another direction until another flash of inspiration. “You know stuff about religion right? So did God have parents or didn’t they want him either?” His voice tapered off as he heard his own words spill out, realising it was too late to stuff them back in. His eyes darted to mine then down, in a look that was somewhere between shame and resignation.